Cabrales: The Prince Cheese of Spain 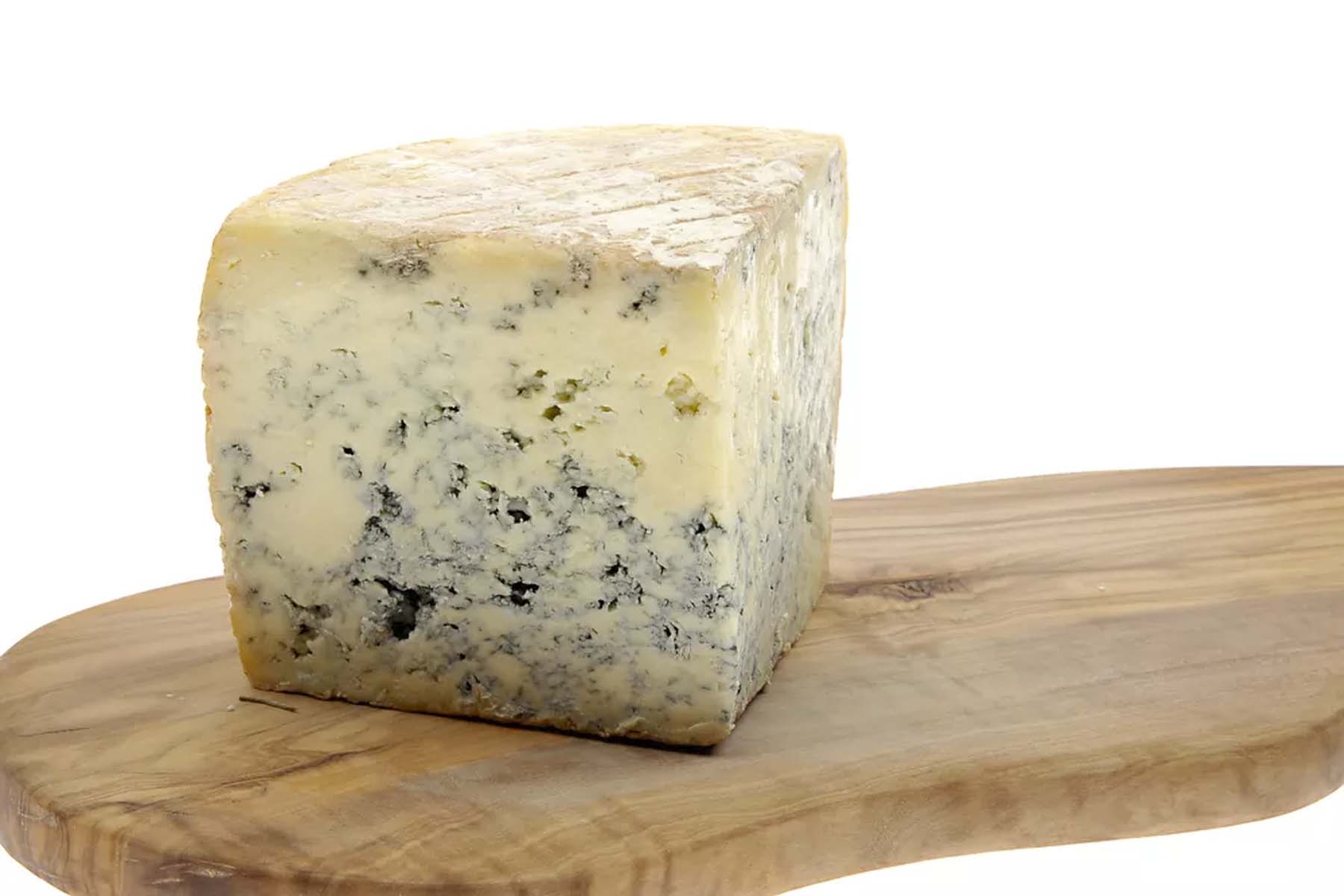 Cabrales cheese, also known as Quesu Cabrales, Queso de Cabrales, or Cabraliego, is a highly-prized cheese and the most international food of the Spanish northern region of Asturias, with an intense, persistent and slightly spicy flavor. In 2020, Guinness World Records awarded Cabrales the record of the most expensive cheese in the world when a piece of 2 kg was sold for 20,500€.

Cabrales cheese is a semi-hard, fatty blue natural cheese, handmade by the farmers themselves, with raw cow’s milk or with a mixture of two or three kinds of milk: cow, sheep, and goat, although cow´s milk is largely the dominant one. It resembles French cheese Roquefort.

The cheese can be made from unpasteurized cow’s milk or blended with goat and/or sheep milk. Once the cheese is made, it is placed in natural caves in the mountains to mature for two to four months. In these caves, the relative humidity is 90% and the temperature oscillates between 8º and 12º C. These conditions favor the development of penicillium-type molds in the cheese during ripening, which gives it its blue-greenish areas and streaks

Unlike other blue cheeses injected with Penicillium, Cabrales cures from the outside of the cheese to the inward. The flavor is slightly spicy, more pronounced when it is made with pure goat’s and sheep’s milk or in a mixture.

At the end of its ripening process, the cheese has the following characteristics:

Since 1981 it enjoys a Protected Designation of Origin (DOP) status. It is exclusively made in the heart of the Picos de Europa mountains in Asturias region, within the administrative council region of Cabrales and some villages in the Upper Peñamerella region (Peñamellera Alta): Caravés, Oceño y Rozagás. All the milk used in the production process comes exclusively from farms established in the above cited production areas and controlled by the Regulatory Council of Cabrales.

Similar cheeses are made in the area in other municipalities belonging to the province of León or Cantabria, but although they are similar cheeses, they are not Cabrales cheeses. The same happens with another very important cheese that is also made in Asturias, the Gamonéu DOP cheese, another blue cheese from the Picos de Europa area that is not Cabrales.

There is a legend has that a farmer was storing milk in a cave when he saw a beautiful shepherdess. They fell in love and ran away to enjoy their love. Months later, he remembered that milk forgotten in the cave and found that it had been transformed into a delicious blue paste. Since then, the Cabrales farmers have been keeping the curdled milk in caves so that the mountain can work its magic.

Most likely, Cabrales cheese was born out of necessity, since at some point in its history, the locals did not have time to consume all the milk they had fresh from their herds or all the cheeses, so they realized that if left to mature in caves, they were preserved and were very good, and also noted that their consumption avoided catching diseases such as malt fever, which was transmitted before pasteurization was used.

Rind: Cabrales cheese is ripened in natural caves with high humidity. The rind is natural, soft and thin. It should not have cracks or strange marks. The color it acquires in the caves is orange-brown to grayish, and the appearance to the touch is slimy due to the significant microbial development on the outside of the cheese during ripening. It may present microbial growths that give a red or yellow coloration at certain points.

Paste color: The paste of Cabrales cheese has an ivory-white color, which may vary depending on the type of milk used in its production. This color should be homogeneous throughout the mass. Throughout it there are areas and bluish-green streaks due to the growth of the fungus of the Penicillium genus.

Characteristics of the development of Penicillium: Penicillium should grow throughout the mass of cheese, this growth should be homogeneous. The color is bluish-green from light to dark depending on the ripening time of the cheese, but this color should not turn black. It should not show marked evidence of puncturing of the cheese mass.

Eyes and cavities: The characteristic cavities that this cheese presents, technologically necessary for a good development of the fungus, should not reach a size greater than 0,3 cm, the cheese will have small mechanical openings. As this cheese is made with raw milk, it can present fermentative eyes in the mass, but these should not be numerous to the naked eye.

The firmness of the paste depends on the ripening time, but the optimum characteristic is semi-soft to soft, unctuous, which implies that the cheese has ripened in the cave for the necessary time. The texture should be homogeneous throughout the mass and with a very fine, almost imperceptible granularity. The adherence of the cheese should be at medium-low levels.

Smell: The smell of Cabrales cheese is intense and penetrating. The predominant family is lactic, although being a cheese in whose maturation the fundamental microorganism is Penicillium, the important lipolytic work that this causes, leads to a great complexity in the compounds released. The type of milk with which the cheese has been manufactured also influences the intensity of the perceived odor, the smell is appreciated with more intensity when goat’s milk is used in its manufacture. The smell has to be clean and pleasant, spicy notes are also perceived. The development of fruity components (hazelnuts, almonds…) is very important in the quality of the smell.

Flavor: The flavor of the cheese should be balanced and intense. Depending on the type of milk with which it is made, the intensity of the flavor is accentuated. It should not have an excess of salt, nor should it leave a bitter taste at the end. The spicy sensation should be at medium levels of intensity, it should not be annoying. Neither should there be a sensation of intense astringency.

Aftertaste or residual taste: After eating the cheese should remain in our memory the pronounced and intense flavor that we have perceived and this memory should persist for a while, therefore the sensation should be pronounced, intense and persistent.

Cabrales cheese can be eaten alone as an appetizer or as an ingredient in the preparation of other dishes. It is a great as a starter or a finishing dish after a good lunch or dinner.

Cabrales cheese can be eaten with almost anything, with a dessert, fruit, as an accompaniment sauce with meats or fish, salad dressing, pizza, pasta, croquettes, pasties, with sweets, jams, honey…. the variety is virtually infinite.

This cheese is best paired with red wine, figs, and cured meat products. It also pairs perfectly with Asturias cider and dessert wines.

How Cabrales cheese is Produced

The elaboration of this rich soft cheese is a process similar to other green or blue cheeses in which it is developed with the intervention of penicillium. After the cheese is elaborated, its matured in a natural cave.

For the production of Cabrales, cow’s milk is used from two milkings, the one in the morning and the one at night. To make a cheese of about 2,5 kg, it is necessary to use 25 liters of milk. It is possible to use a mixture of cow’s milk with sheep’s milk, goat’s milk, or both.

The milk is heated and when it is at the right temperature, animal rennet is added, which can be either natural from the stomach of a suckling goat or obtained from industrial preparations. A small amount is added so that it curdles slowly at a lukewarm temperature. When the curd is formed, it is broken with lyres or broken into crumbs – a process known as despizcar – and left to rest, separating it from the whey.

Then it is put into cylindrical molds and not pressed, filling the molds with excess or top. Then the molds with the cheese are placed on some boards or talameras so that they drip and release the whey that remains and dry.

The maturation process takes place in natural caves in the Picos de Europa. Not just any cave will do, but those regulated by the Cabrales PDO Council. In these caves, the temperature ranges between 8 and 12 °C with a relative humidity of 90%.

In these conditions of temperature and humidity, the cheese produces the development of penicillium fungi, which are the ones that give it its color and flavor, causing it to have that green or blue veining. If the cheese is not ripened in these caves, it is not a Cabrales DOP. cheese, which requires controlled ripening in this environment. The presence of spiders in the caves is a good sign, since arachnids prevent flies, which could damage the cheeses.

The ripening process is very peculiar because Cabrales cheeses, unlike other types of cheese, instead of drying out and hardening as they mature, the opposite happens here. As time passes in the cave, Cabrales cheese becomes increasingly riper and softer. The minimum time is about 2-3 months and it is not usually kept for more than 6 months because it is too strong.

As the cheese matures, its external appearance changes and it becomes softer and takes on a darker color. The paste can be white, yellowish or even slightly orange, depending on the type of milk and proportion with which it is made, with cheeses from each producer being similar but different from those of another. In the caves, cheeses from different producers are ripened, placed on different shelves.

Traditionally, Cabrales was sold wrapped in the moist leaves of Hacer pseudoplatanus (Sycamore Maple), but nowadays regulations require that commercially produced Cabrales be sold in a dark-green-colored aluminum foil with the registered official stamp of the DOP Queso de Cabrales. Within the production zone it is still possible to encounter Cabrales cheese with the traditional maple leaf wrapping, although it is only ever produced in small batches and not approved for export, as it is ineligible for DO status.

In 2019, the last year before supply disruptions due to COVID, it was produced 433,000 kg of Cabrales cheese according to the Consejo Regulador D.O.P. Cabrales (Cabrales Regulatory Council).

How to Store Cabrales

Cabrales cheese should be refrigerated between 2 and 5º C for optimum preservation. It is advisable to leave it in its original packaging and well covered. Cheeses can absorb odors and also give them off. This cheese in particular has a strong odor. To avoid cross-contamination, it should not be placed next to meat or other foods.

The experts of this product recommend cutting the cheese and storing the pieces in the refrigerator, in a vacuum-sealed container so that it does not dry out. Exposing it to the refrigerator causes the cabrales to dry out and lose its essence. Another, less usual option is to store it in the freezer.

Cabrales is a cheese with a long shelf life. To preserve it, it is necessary to keep it moist, either by wrapping it in a damp cloth that must be changed daily, or by cutting it into pieces and storing the pieces in the refrigerator in an airtight container.

Dry environments are the worst enemy of Cabrales cheese. To preserve it, it is best to cut the cheese and store the pieces in the refrigerator in a vacuum-sealed container so that it does not dry out. This way it can last for more than a year, although it will gain in intensity and sharpness of flavor.

How to Cut Cabrales Cheese

Unctuous cheeses such as Cabrales can be presented in small cubes or in blocks so that they can be served directly with the help of a knife.