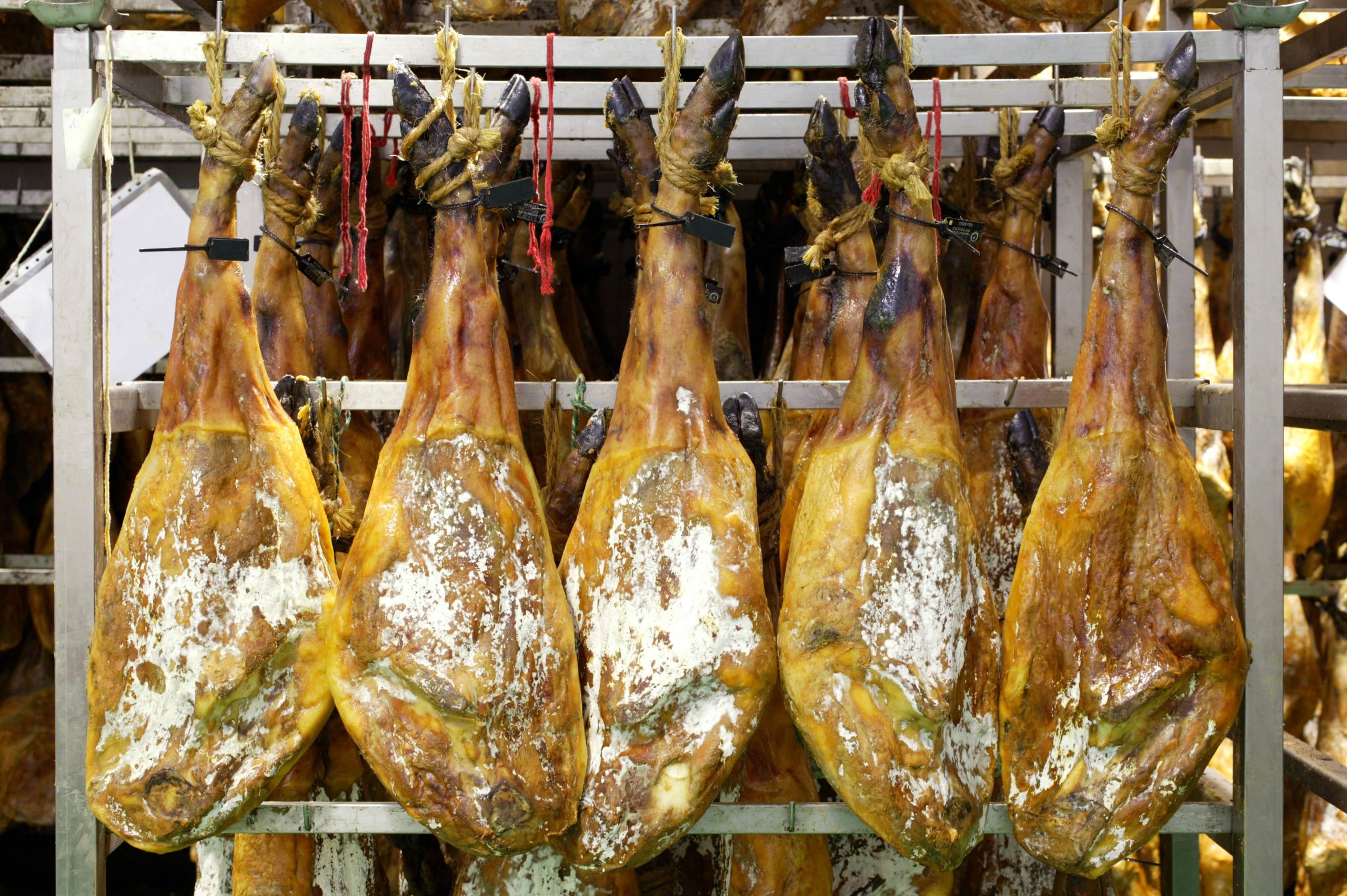 However, knowing the three fundamental aspects that influence the final result of the ham, it will be easy to handle and understand what lies behind the various concepts that accompany the hams. Let’s get on with it!

The three factors that determine the final quality of a Spanish ham or shoulder ham are:

Depending on the breed, there are two different types of ham:

A) Types of Ibérico hams

In order to know the types of Ibérico ham that we can find on the market, we must understand the meaning of the concepts that appear on the sales denomination (label) and the colours of their corresponding seals.

The quality of an Ibérico ham is mainly defined by the feed that the pig from which it is obtained has received and its racial purity. To this must be added an adequate curing process in time and form, preferably in natural drying sheds.

The label is there to help the client and give assurance of the particular quality of each ham product. Understanding the labelling and knowing the seals will help you to select the ham best suited to your preferences and budget.

Three aspects to bear in mind when identifying the ham:

Labelling of Ibérico ham. Seal and denomination of sale.

The name of the product or sales designation is placed on the label or vitola, and is made up of three designations that must appear in the following order:

Type of product. The first designation that appears in the name contemplates two options; “Jamón” (Ham) or “Paleta” (Shoulder ham).

Feeding and handling. The second designation indicates how the pig from which the ham is produced has been fed and reared. It can be:

Breed purity. The third designation defines the percentage of Iberian breed. There are two options for this designation:

Order in the designation of sale of Ibérico ham

The Colour of the Label

In order to differentiate more easily the qualities of ham, since the entry into force of Royal Decree 4/2014 which regulates the quality of Iberian products, they are identified with coloured seals with the following classification:

Green label: For Ibérico field fattened hams with a percentage of Ibérico breed of 50, 75 or 100%.

White label: For Ibérico pigs fattened inside a farm with percentages of Ibérico breed of 50, 75 or 100%.

Watch out for the seal to bear the ASICI logo (Interprofessional Association of Ibérico Pigs), which is a must, and can only be replaced or accompanied by a seal of the same colour of a Protected Designation of Origin (D.O.P.).

If the ham or shoulder ham has a seal in any of the above-mentioned colours, but does not bear the ASICI logo or the D.O.P, it is not a certified Ibérico ham. In this case, the producer, manufacturer or seller cannot market it or label it with the designations covered by the quality standard, including “ibérico”, “bellota”, “pata negra”, “montanera”, “cebo de campo” and “cebo”.

The same classification is applied to pre-sliced products according to the colour of the label.

The label must bear the words “Certified by” with the name of the certifying body or its logo.

Very important: If a ham does not strictly comply with what is described in the sales denomination, does not have the appropriate seal, or if the certifying body is not mentioned, the terms included in the ham quality standard cannot be used on the label or in promotional activities.

The first thing to say is that white hams or white hams are hams that normally come from pigs of breeds such as: Duroc, Pietrain, Landrace or Large White. They are usually fed on farms in an intensive regime based on feed and cereals.

The best known is the Serrano Ham. Be careful because not all white hams are Serrano hams, although we often refer to them as such. The term Serrano Ham corresponds to a ETG (which stands for “Traditional Speciality Guaranteed” in English).

What does this mean?

The ETG is a quality figure that the European Union has to help protect, typify and improve the image of traditional products produced in EU countries.

The ETG protects the traditional method of production, not the origin as do the Protected Designations of Origin (D.O.P.) or Protected Geographical Indications (I.G.P.).

In other words, only those hams that comply with the specifications approved by Europe will be able to use the term Serrano Ham.

The term Serrano Ham is so well known and widespread among our population that sometimes we call Serrano Ham to everything that is white ham, and this is a mistake. To check that this is the case, we will have to verify that the term “Serrano ham” appears on the label as a guaranteed traditional speciality, and that the months of curing also appear on the label. In this case, as it is covered by the traditional speciality guaranteed, the curing time must be more than 7 months.

Those hams that are not protected under the ETG “Jamón Serrano” must be marketed under the name “Jamón Curado” (cured ham).

According to Spanish law Royal Decree 474/2014, of 13 June 2014, which approves the quality standard for meat derivatives, the following mentions may also be included for hams and shoulders, provided that they comply with the minimum production period established for each mention:

In addition to this type of white hams, we can also find those protected by the Protected Designation of Origin (D.O.P.)  Jamón de Teruel, or two types with Protected Geographical Indication (I.G.P) of IGP Jamón de Trevélez and the IGP Jamón de Serón.

Below in the infographic each of them are marked so that it is easy for you to recognise them.

How many Protected Designations of Origin for ham are there in Spain?

For Ibérico ham (black pigs) there are currently 4 in Spain:

As for White / Serrano ham (white pigs), there is only one Protected Designation of Origin:

How many Protected Geographical Indications (I.G.P.) for ham are there in Spain?

Currently, Serrano Ham is a ETG (which stands in English for “Traditional Speciality Guaranteed”), the ETG is one of the quality figures that the European Union has to help protect, typify and improve the image of traditional products produced in EU countries, such as Serrano Ham. The ETG protects the traditional production method, not the origin, as IGP and DOP do. Currently, it has been announced that they are going to apply to Brussels for the IGP for Serrano Ham.

We hope you find this information interesting and that it will help you to identify those hams protected by a Protected Designation of Origin or a Protected Geographical Indication. Both are certifications that come from public bodies and are recognised by the European Union.