Fuet: The Most Popular Sausage of Catalonia 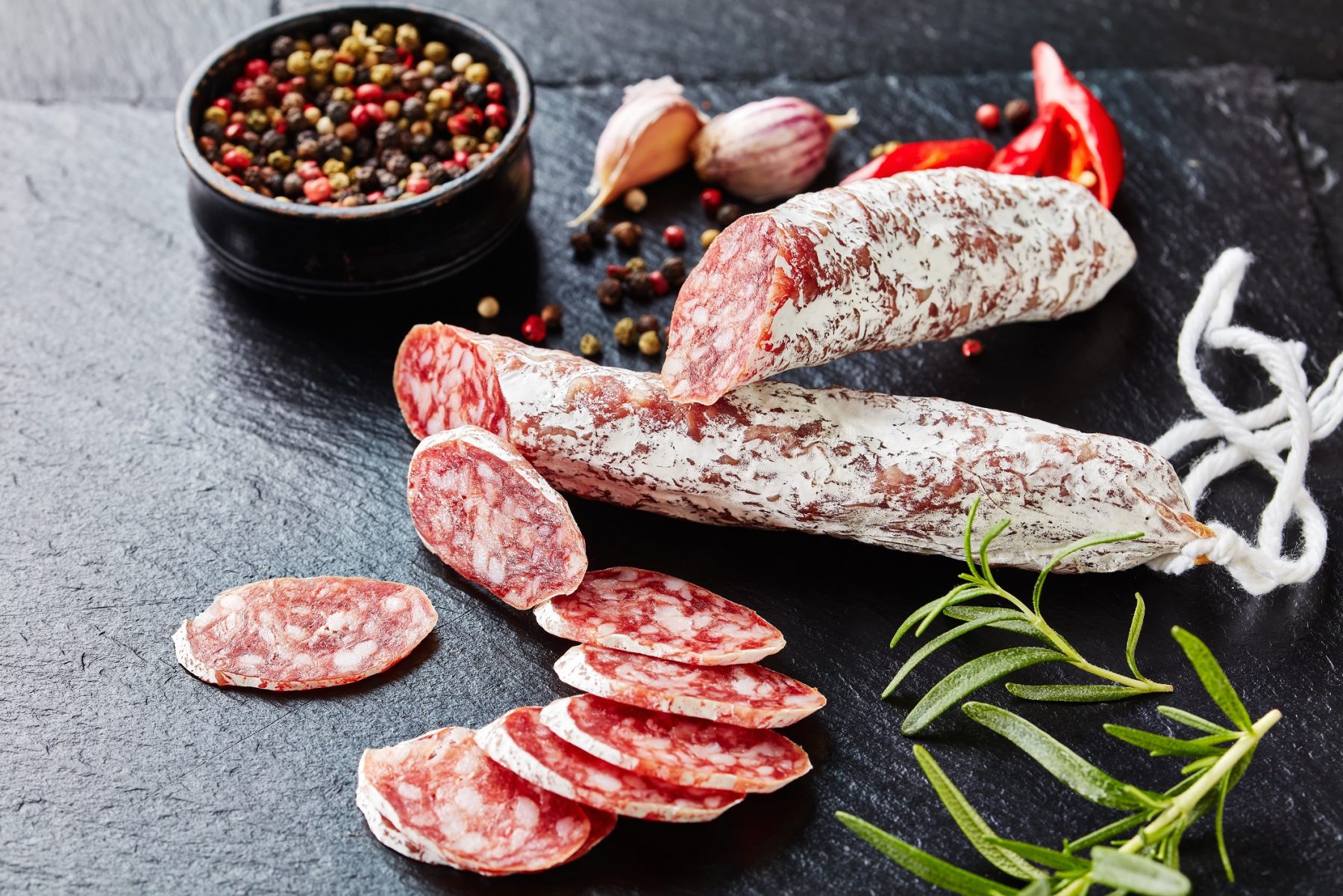 Fuet, also called Espetec, is arguably Catalonia´s most popular cured sausage, and also quite popular throughout Spain. This thin, soft and tender sausage is made from lean pork seasoned with salt, pepper, and other spices and finely minced fat. It is stuffed into a thin pork casing with a caliber of 34 – 36 mm.

Fuet has a fine appearance, easily recognizable by its narrow, long, and sausage-like shape. It is usually characterized by a white layer of mold (Penicillium Nalgiovense, of the family that covers camembert or Roquefort) that contributes to the aroma. Fuet is not lacking in any Catalan home when it comes to a Tapas. With its smooth texture, this characteristic white layer and unique flavor is the perfect accompaniment for any gathering.

The word Fuet means “whip” in Catalan, and it’s so-called because of its long, thin shape measuring between 30 and 50 cm long and up to 4 cm in diameter, with a usual weight between 150 and 300 gr.

It’s made of about 60% lean meat to 40% finely minced fat and is dry-cured. It may have different flavors depending on the type of spices that have been used and the process of fermentation it has undergone. Though it can often be coated with black pepper, herbs, garlic, dried red peppers, or dried onion, it is most commonly found with a white, almost powdery coating. Unlike Chorizo contains no paprika.

As for curing, it can take between 15 and 90 days. There are those who prefer very cured Fuets, and others less cured or fresher with just two weeks of curation since the texture is better perceived.

Currently, the largest center of Fuet production in Catalonia is the Osona region, where Vic pork is used as a base, but it is made all over Catalonia. Fuet produced in the Olot region is also very famous.

Fuet is a type of sausage that appears after a drying process of the meat used. It is believed that this technique may have been in use for more than 5,000 years, together with a fermentation process to make it more resistant to temperature changes.

The art of preparing sausages and ham reached Spain via the Pyrenees mountain range. Even to this day, the Pyrenees are known as an important region for the production of ham and air-dried sausages in Spain. The cold mountain winds provide the perfect conditions for this.

In Catalonia, sausages appear in different recipe books from the 1600-1750 Baroque period. Already at that time, it was produced as it is known today: as a straight type of sausage, with a usual thickness of between one and two fingers and a round shape.

It was not until the 19th century that permanent Catalan sausages such as Fuet and Salchichón became part of the tradition of the region’s production.

How to Eat and Cut Fuet

Fuet is a versatile sausage with a unique and delicious flavor. It is eaten usually raw, cut in not too thin slices. You only need bread with tomato or along some kind of accompaniment such as olives, nuts, or other sausages, and a glass of red wine to enjoy it to the fullest as Tapas.

To eat Fuet there are two things to keep in mind, the thickness of the slices and the texture of the sausage. It’s usually recommended to cut thicker slices if it’s softer; if it’s drier, it’s better to cut thinner slices.

There are other options as well to eat Fuet where you can fry the fuet slices in the pan and then serve them in an omelet (tortilla).

Many Spanish chefs and cooking enthusiasts like to include Fuet in soups and stews, or simply roast it and serve it on warm bread.

Should We Eat the Peel?

In short, it is a matter of taste because not even the experts agree. Some say with, others say without.

Fuet white coating, which can be seen on the outside of the pieces, is created during the drying phase. The water inside the product is gradually expelled towards the outside, causing the outside of the sausage to become damp, which leads to the proliferation of mould. To prevent these moulds from being dangerous to our health, starter cultures are used. They are beneficial to the product because they prevent pathogenic or harmful moulds from growing. It is perfectly safe to eat, but for those who don’t like it, it can be peeled off.

Some experts recommend eating the peel as long as the casing in which it is stuffed is made of natural pork, because on the contrary it would be reduced the Fuet´s flavor characteristics and its essential crunchiness.

However, there are others experts who prefer to remove the skin to better taste the product and not alter the flavor of the Fuet. Given the lack of general unanimity, decide for yourself, depending on your preferences.

But keep in mind that the sausage casing can be made of pork casing, which is edible, or synthetic coating, which are made of cellulose, polyamides, or collagens, and are not always edible.

How Fuet is Made

Differences Between Fuet and Salchichón

Fuet is the little brother of the Llonganissa and differs from the rest of the sausages from it, such as Salchichón, mainly by its diameter size, curing time, and type of meat used. Roughly speaking, Salchichón is a 19th-century product, while Longaniza and fuet are from the 20th century.

Fuet and Salchichón are two cured meats often confused with each other. Although they have many similarities, their differences are what make them unique. The main similarity is that they are made using minced and marinated meat (usually of pork). Another similarity is that both are sausages, that is to say, that for their preparation the raw material has to be sausaged in a pork casing or similar, which will then be left to cure and dry.

As for the differences, they are given mainly by appearance and size, ingredients and areas of origin. Salchichón is usually much larger, both in length and diameter and Fuet is much thinner (never more than 40 mm) and is also usually shorter.

Curing is also determined by the size, and the larger a sausage is, the longer it will take to cure properly. Unlike Salchichón, fuet is ready in a short time, usually about two weeks approximately. Although the preparation for both sausages is quite similar, Salchichón usually has much more peppercorns and the result is leaner. Fuet, on the other hand, contains less fat and has a milder flavour.

Other Sausages Similar to Fuet

There are other Catalan, or from the rest of Spain, sausages similar to Fuet. They share a similar base of characteristics, however, what varies is the caliber, size, curation length, species used, and origin. Depending on these variables, we have:

Thinner, more elongated, and generally in the shape of a collar or horseshoe, Secallona is a drier sausage than Fuet and generally does not have as much mold. Another identifying feature is the indentation in the middle.

When left to dry it becomes a more brittle sausage. In terms of ingredients, we are talking about exactly the same as Fuet. Its name comes from the Catalan word “secall” which translates as something very dry and little. It is usually very cured and cut into very thin slices, thinner than in the case of Fuet.

It is a drier sausage, in fact, its name comes from “somall”, that is to say, dry and near dehydrated thing. It is a bit thinner and more delicate than Fuet and more elongated, also without external coating. Its characteristic lies in its elongated horseshoe shape. As a rarity, it is not uncommon to see giant somallas, which measure more than a 1,5 meters.

Literally ‘little fingers’ in Catalan, these are a miniature version of Fuet or Longaniza. They are small, about the size of a pinky, tender, and especially good as an appetizer or snack.

Strictly speaking, Llonganissa and Salchichón sausages are the same, in fact, the famous IGP of Llonganissa de Vic houses both options. It is the thickest sausage among this family of sausages. This is a sausage that needs more curing time, of about three months, because it is thicker and also with a greater seasoning of pepper and salt.

It is stuffed in the final part of the small intestine, which is the widest, and is hung during the winter months. Officially, Llonganissa can be made all over Catalonia, but it can only be made with IGP Appellation of Origin status in the Plana de Vic area (part of Barcelona province).
Longaniza is the most common name for this type of sausage. There are many varieties, but their most common characteristic is a length of between 50 cm and 90 cm and a diameter of between 4 and 10 cm.

Also in the family of Catalan Salchichón and Longaniza sausages, we find this emblem of the region of Pallars (in the north of Lleida). It is flattened, darker, and less fatty than the previous ones because it is usually made with the noblest meats of the pig. It usually weighs between 250 and 300 grams and has a slower curing process, so it is not so tender, but it is very tasty.