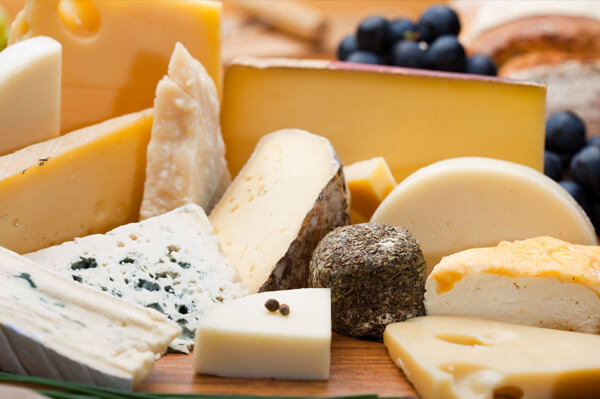 In Spain there are more than 100 varieties of cheeses made by artisans. Of these 100 varieties, 26 have Protected Designation of Origin (DOP) and 3 more have Protected Geographical Indications (IGP), a seal of quality that indicates quality and characteristics that are only possible thanks to the environment in which they are produced and after meticulousy following its production standards.

Made with whole cow’s milk, although it may contain 5% sheep’s milk, raw or pasteurised. The rind of this cheese is compact and smooth and its interior is off-white in the case of soft cheeses and yellowish ivory in the case of semi-cured cheeses. It contains small, more or less rounded, irregularly distributed eyes. The soft cheese is reminiscent of fresh milk and butter and has a soft texture.  Semi-cured cheese has an orange rind reminiscent of fresh milk and roasted nuts and is medium firm. Cured cheese is characterised by a moderate to strong odour reminiscent of melted butter and toasted hazelnut. It has a very high firmness and an intense, slightly spicy flavour.

Made from Manchega sheep’s milk, it has a hard, pale yellow rind, or blackish in the case of the older cheeses. Its interior is firm and compact and has small, irregularly distributed eyes. It is white or ivory-white in colour and has a medium-intensity odour. It has a pleasant taste of sheep’s milk and a slightly acidic flavour. Semi-cured cheeses may have a spicy taste.

Cured cheese made from raw sheep’s milk. Its rind is smooth, hard, thick and brown in colour. Its interior is yellowish-white depending on its degree of maturity and contains no holes. This cheese is characterised by its low elasticity and intense smell of sheep’s milk. Its aroma is mild and may be reminiscent of nuts or pineapple, and its flavour is not very acidic and not very bitter. It has a slightly spicy touch, especially if it is mature.

Cured cheese made from cow’s milk and smoked with birch wood. It is a cheese with a very characteristic flavour and aroma. The rind is shiny, hard, smooth and ochre-coloured. Its interior is white-yellow and compact, with a few small round eyes. Its rind is smoked and has a characteristic flavour and aroma. Its smell and aroma is of medium intensity and reminiscent of milk. It is slightly salty and somewhat acidic. Mature cheeses have a spicier taste.

Made with pasteurised goat’s milk and bathed in red wine from Murcia. The rind is smooth, maroon in colour and smells of wine. Its interior is compact and white in colour with an ivory or yellowish tone. The texture in the mouth is creamy and not very crumbly. When chewed, one can notice lactic aromas such as goat’s milk or butter and hazelnut. The taste is slightly acidic and can sometimes be slightly bitter.

This cheese is made from goat’s milk and has a lactic smell and an aroma reminiscent of butter in the cured cheeses and fresh goat’s milk in the fresh cheeses.

Cheese made from cow’s milk. It has a smooth yellow rind. Its interior is ivory white or yellow in colour and may have small, irregularly distributed eyes. Cured cheeses have a more intense yellow colour. Its smell and aroma may be reminiscent of butter and mild hints of vanilla. It has a slightly acid taste in the soft cheeses and slightly bitter in the cured cheeses.

Cheese made from pasteurised cow’s milk. Its rind is straw yellow in colour and its interior is uniform and ivory white or soft yellow. Its smell and aroma is of low intensity and reminiscent of lactic. It is tender, dry in the mouth and slightly acidic.

It is made from pasteurised cow’s milk and has a cylindrical shape similar to a chef’s hat. Its paste is granular and clayey. It has a low-intensity smell and its aroma is reminiscent of sour curd in fresh cheeses and of butter in mature cheeses. Its flavour is slightly acidic and somewhat metallic and spicy in mature cheeses.

Cheese made with pasteurised cow’s milk and has a medium intensity aroma reminiscent of yoghurt in the fresh cheeses or lactic in the more mature ones. It is soft and crumbly and tender. The ripest cheeses have a spicy and fiery touch.

Asturian cheese made with raw cow’s milk and very fatty. Its paste may have some small holes. Its texture is semi-hard to hard in the more mature cheeses. It is slightly acidic and somewhat bitter and spicy.

Cheese made from cow’s milk. Its cream-coloured paste has many small, irregularly shaped holes. Its aroma is reminiscent of toasted nuts or dried mushrooms and its flavour is balanced and somewhat acidic.

A cheese made from cow’s milk with an ivory-white to yellowish-white paste. It has a soft texture in the soft cheeses and a firmer texture in the cured cheeses. It also has an aroma similar to butter and a slightly acidic flavour. This cheese leaves a residual taste of sweet cream.

Cheese from Fuerteventura (Las Palmas) made with raw or pasteurised Majorera goat’s milk. Its paste is compact and with some small eyes. The soft cheese has the smell of goat’s milk and a hint of yoghurt. The cured and semi-cured cheese has a smell reminiscent of butter and nuts. In terms of aroma, the ‘tierno’ and ‘semicurado’ have notes of citric acidity. The flavour is slightly acidic and bitter in the mild cheeses, slightly bitter in the cured and semi-cured cheeses.

Cheese from San Miguel de la Palma (Santa Cruz de Tenerife) made with raw milk from Palmera goats. Some cheeses are smoked with almond and Canary Island pine shells. Its smell and aroma have lactic hints, dried fruits and grass. The mature cheese has hints of butter and dry grass. In addition, the maduros are slightly spicy.

Rioja cheese made from goat’s milk. The fresh cheese has a sweet taste and an aroma reminiscent of goat’s milk, and the soft cheese has a smell of curd and cut grass and an aroma of goat. Semi-cured and mature cheeses have a slightly goaty and musty aroma. The cured cheeses are somewhat sharp and bitter.

Cheese from Cáceres made with raw goat’s milk. It is very popular for its rind to have paprika on it or to be spread with oil. It has an aroma with floral and fruity hints and a slightly acidic flavour. This cheese has a residual taste of nuts.

Cheese made from raw sheep’s milk. It has a characteristic smell of sheep’s milk, of cooked butter, and of nuts in the cured cheeses. It is slightly acidic and spicy in the more mature cheeses.

Cheese made from raw sheep’s milk. It has a lactic and natural rennet smell, and a somewhat creamy texture.

Cheese from Badajoz made from raw sheep’s milk. It has a flavour and aroma reminiscent of yoghurt, sweet cream and butter.

Cheese from Cáceres made from sheep’s milk. Its paste has a fairly soft consistency and its smell and aroma have lactic and buttery notes. It has a slightly acidic flavour.

A fatty, semi-fat cheese from the Canary Islands made from sheep’s milk with that of other species (as long as it contains 60% sheep’s milk). There are three varieties: Queso Flor de Guía, Queso de Media Flor de Guía and Queso de Guía.

Cantabrian cheese made from pasteurised cow’s, sheep’s and goat’s milk. Its paste is soft in tender cheeses and firmer in cured cheeses. It has the smell of lactic family and butter and, when smoked, the smell and taste of smoke typical of this process.

Cantabrian cheese made with raw cow’s, sheep’s or goat’s milk. It can also be found mixed with two or three types of milk. The cheese is matured in natural caves with high humidity. It has an intense smell and aroma of cow or herd, natural cave and mould. It is slightly pungent, a sensation that intensifies when the cheese is more matured.

Fatty cheese from Asturias made from cow’s, sheep’s and goat’s milk. Its aroma and flavour have mild smoky notes due to its smoked, natural cave and mouldy taste. It is tender and somewhat creamy. When chewed, it is reminiscent of sheep’s or goat’s milk and has a bitter and spicy touch in the cured cheeses.

Asturias cheese. Made with raw milk from cows, sheep or goats, or a mixture of two or all three types of milk from cattle that graze in mountain pastures. It is a compact, soft cheese with a penetrating smell reminiscent of lactic and mould. The more mature cheeses have a spicy and nutty smell. It is tender and creamy and its flavour is not very intense and slightly spicy.

Blue-veined, fatty cheese made from cow’s milk or a mixture of cow’s milk and sheep’s and/or goat’s milk. It is presented whole or beaten. The paste is ivory-white in colour and its flavour is intense, salty and slightly sharp. When it is beaten, it has no rind but has the same colour, aroma and flavour as the whole cheese.

It is a type of cheese made from sheep’s milk from farms in Castilla y León, either raw or pasteurised. It is a fatty or extra-fatty cheese and is matured for between 30 and 70 days, depending on the format. It is so called because it is produced in Castilla y León, in cheese dairies specialised in the production of high quality raw materials. Castellano cheese from unpasteurised milk has a strong aroma and somewhat spicy flavour, which conveys the raw milk. The taste of the variety made with pasteurised milk is strong as well, but does not sting so much. The mixed milk variety is the milder of the three, although it has its own personality. Queso castellano is very similar to Queso Zamorano.

Asturian cheese made from goat’s milk that is slowly and naturally dried to obtain a hard or semi-hard paste. Its flavour is very pleasant and of medium intensity with a slightly acidic touch. It is produced in the traditional way using the milk milked in the morning mixed with the milk milked in the afternoon. After draining, it is subjected to a light smoking process.