Chorizo: The Superstar Among Spanish Tapas 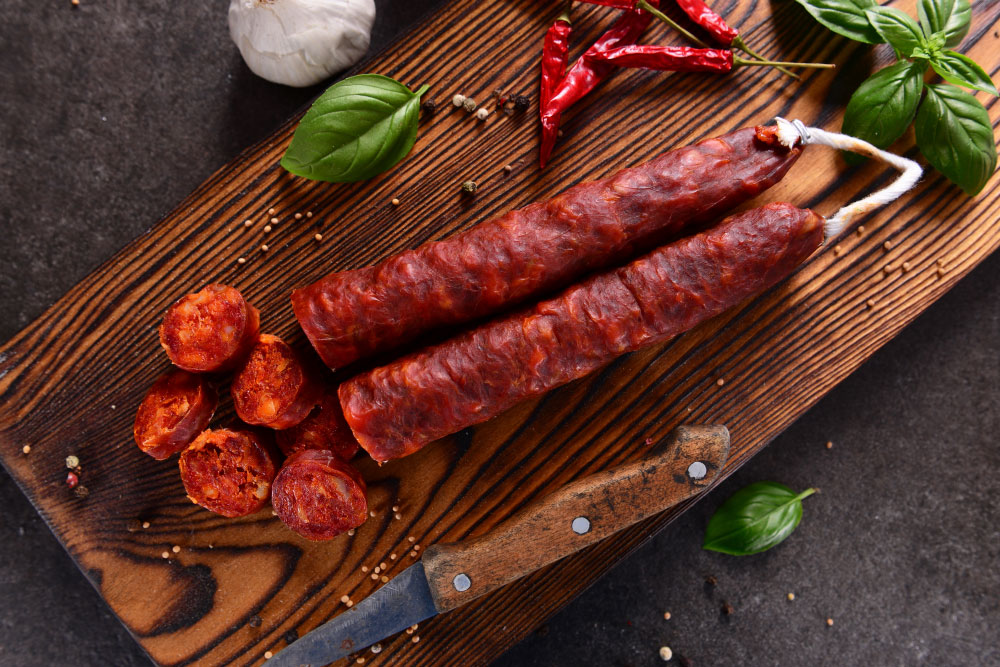 Spanish chorizo is the most popular pork charcuterie in Spain and is a must in any Spanish kitchen and restaurant.

A sausage to be considered as chorizo needs to be made with garlic and paprika, cured in the open air or smoked, contain minced pork as the main base, and be marinated with spices such as paprika, which gives it its typical red colour.

In Spain chorizo comes in dozens of varieties: Smoked, spicy, cured or raw, chorizos are a must in the kitchen and also on the table. Cular from Salamanca, from Pamplona, from Cantimpalos, from El Bierzo, from La Rioja, from Soria, from Aracena, from Ronda, Ibérico from Huelva, from Los Pedroches, from Extremadura, from Teror (Canary Islands)

The recipe is not unique, but what they all have in common is the use of lean pork, pork belly (panceta), and pork jowl, minced and seasoned with salt, garlic, and paprika. They are then stuffed into beef or pork casings and left to air or smoke, depending on the area.

Depending on their intended use, they are cured to a greater or lesser extent. If they are to be consumed in slices, for tapas or sandwiches, they are usually left to dry for three to five months in the case of large pieces such as the famous ‘cular’.

Chorizo is eaten alone with bread, or sliced in a sandwich, grilled, or fried. It is also used as a partial replacement for ground (minced) beef or pork.

Spanish chorizo is not only the most popular sausage in Spain, but also the most appreciated Spanish sausage outside Spain. According to The Spanish Chorizo Consortium (Consorcio del Chorizo Español), in 2021 there was approx. 73 million kg of Spanish chorizo exported to the rest of the world, being the UK, France, and Germany the main importing countries.

The origins of modern Spanish Chorizo are from back to the 17th century with the arrival of paprika from the Americas to Spain. Paprika is a highly-prized spice that gives its characteristic reddish colour and spicy flavour. Before then, former versions of chorizo had either a black or white hue depending on whether it had blood or not.

The first official mention of the word chorizo come is dated in 1726 when la Real Academia Española (Royal Spanish Academy) published the first definition of chorizo in el Diccionario de Autoridades (The Authoritative Dictionary): “a short piece of tripe stuffed with minced meat, usually pork, marinated and spiced, which is cured in smoke to make it last.”

Chorizo gained popularity in Spain when the Spanish King Carlos IV encounter a choricero (a chorizo maker) in one of his hunting expeditions. The humble choricero offered the monarch a sausage from his saddlebag. The King liked it so much that he named him an official supplier of the Royal House. This encounter was immortalised in 1793 by the Spanish painter Ramón Bayeu y Subías (brother-in-law of the famous Spanish painter Francisco Goya), in a tapestry called “El choricero”, which is now located in The Prado Museum (Museo del Prado) in Madrid.

Depending on its shape, chorizo could be of these varieties:

Depending on its curation, chorizo could be of these varieties:

Chorizo de León is a cured and smoked sausage characteristic of the province of León (Castile and Leon), in Spain, very common in León’s gastronomy. It has a long tradition starting in the times of the Kingdom of León more than seven centuries ago. Its original flavor has endured over the years. Nowadays, it is produced in two formats: Picante (spicy) with spicy pimentón de la Vera (paprika) or Dulce (sweet) with sweet paprika.

It is made from the fresh meat of white pigs, castrated males and females, corresponding to the cuts of ham, shoulder, needle, dewlap, pork belly, and back fat, which through a careful production process, together with the qualities of the raw materials, determine the traditional quality of this product, in particular its characteristic flavor and aroma.

The minimum curing period is 30 days and its preferential consumption is one year. It is shaped like a “corra” (horseshoe), dark red in color with purplish hues. When cut, it has a red odor reminiscent of paprika color, slightly darkened, shiny, and without exudation.

Its flavor is slightly acidic and spicy with some hints of bitterness. The flavor is intense and persistent. The aroma is clearly reminiscent of paprika, garlic, and smoke in smoked pieces. It is an intense and persistent aroma. It is juicy to very juicy chorizo and not very chewy to chewy. In the mouth, the meat and fat particles are distinguishable and no hard parts are noticed.

Chorizo de Cantimpalos is a cured variety of chorizo pork sausage that was first produced in the Segovian town of Cantimpalos (Segovia, Spain). Today it is produced in the same area, being part of the protected foods of the Castile and Leon region, and enjoying a Protected Geographical Indication (IGP) appellation of origin status since 2008.

It is made from fresh meat from fatty pork fed on cereals, to which salt and paprika are added as basic ingredients and to which garlic and oregano can also be added, subjected to a slow and natural drying-maturing process, taking advantage of the exceptional weather conditions provided by the proximity to the Sierra de Guadarrama mountains in Central Spain. The flavor in the mouth is smooth, juicy, and easy to chew.

Chorizo de Pamplona (or chorizo pamplonica) is a sausage typical of the gastronomy of Navarre in the North of Spain. It is characterized by containing beef and pork, both finely minced and with a homogeneously granulated appearance.1 It is stuffed into natural (or plastic) casings which, when cured, must have a minimum caliber of 40 mm in diameter. Its final shape is the typical ‘candle’. Its red-orange color (Carmín) is due to the paprika content, so abundant in Navarra. Nowadays, it is very popular and easily found in charcuteries throughout Spain.

It is a chorizo sausage made with the meat of Ibérico pigs (black pigs), which is cured through a drying process similar to other chorizos made with the meat of white or duroc pigs. It is sold cured and is presented in slices, shaped like a candle or a horseshoe. As in the case of Jamón (Spanish ham) from Ibérico pigs, it is considered a much more premium food product with exquisite flavor, commanding also much higher prices than chorizo made from white or Duroc pigs. In addition, as in the case of Jamón, if the chorizo is made with Ibérico pigs 100% pure-breed and acorn-fed, it is called Chorizo Ibérico de Bellota.

El Bierzo is a region located in the northwest of Spain at the border between Castile and León and Galicia regions. With an important tradition in the elaboration of sausages, El Bierzo enjoys an unbeatable microclimate to achieve an adequate curing process for chorizo and other Spanish sausages.

The Canarian chorizo, Chorizo de Teror or chorizo de perro, as this typical product of the Canary Islands is also known, is a soft sausage similar to a Sobrasada that is made from pork and paprika.

The white version of chorizo de Teror has practically the same ingredients, except for paprika and nutmeg. However, its producers have managed, without losing the essence, to give these chorizos their own identity and make it possible to appreciate different nuances among them.

The chorizo from Teror has an enveloping flavor and a unique texture. Among Canary Islanders and visitors it is very well received and its originality envelops the palate of those who try it.

Love chorizo. Had no idea there are so many types. All delicious.