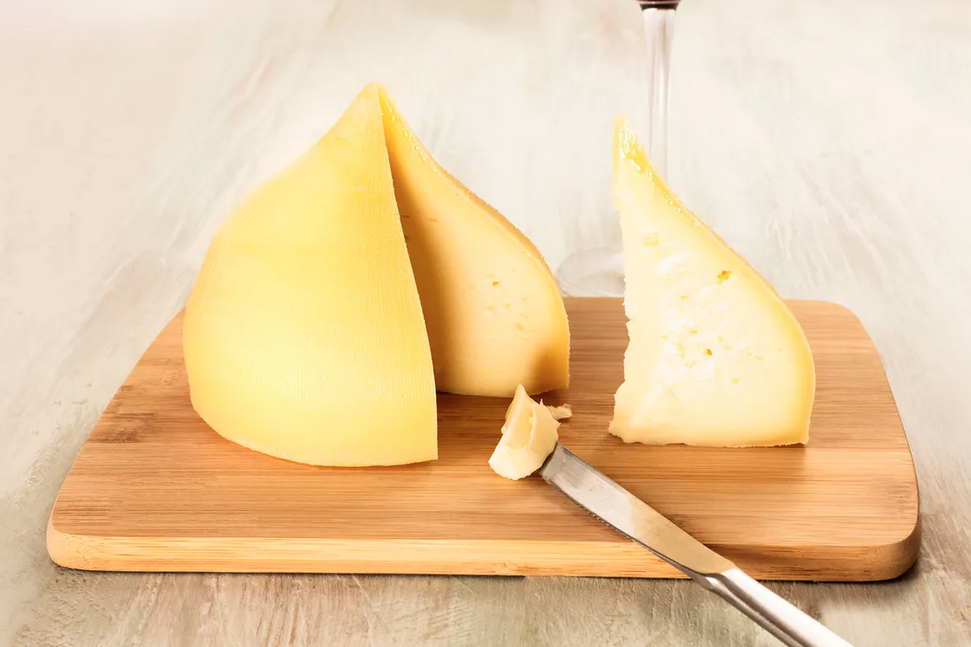 Tetilla cheese (Queso Tetilla / Queixo Tetilla) is the most characteristic and internationally renowned Galician cheese, easily recognizable by its shape and its smooth, thin, straw-yellow rind. The word ‘tetilla’ clearly defines the traditional conical, concave-convex, pear-like shape, with a slight “nipple”, more or less pointed top at its apex, which is the reason why it’s called tetilla, meaning nipple in Spanish.

This cheese is an aged (for a minimum of 8 days) semi-soft cheese made with the whole milk of Friesian, Swiss Brown, and Galician Blonde cows fed by traditional techniques in the region of Galicia, in northwest Spain. The maturing, which takes place between 8 and 30 days, happens in the hot and humid climate of Galicia, which enjoys frequent rain.

This cheese is soft, creamy, uniform, with few holes, ivory-white and yellowish in colour. It is very creamy in the mouth and has a very natural, milky, slightly acidulous and mildly salty flavour, suitable for all tastes. A cheese for daily and continuous consumption, at all times, with good culinary applications, especially for stuffing and breading, due to its melting character with a heat stroke.

It is the most traditional cheese consumed in Galicia, although it is also known and appreciated in the rest of Spain.

The rural structure of Galicia, with small villages and farms scattered throughout its territory, undulating terrain and a temperate and humid maritime climate, makes north-western Spain a perennial and continuous meadow, with small fields in a pleasant landscape.

Galicia is the Spanish region with the highest production of cow’s milk; in any corner you can find a small or large cheese factory producing Tetilla cheese.

Tetilla cheese has its origin in the Galician province of A Coruña, bordering Lugo province, specifically in the villages of Arzúa, Curtis, and Melide.

Although its origins date back to 1753, it was not until 1992 that it was granted Protected Designation of Origin (DOP) status.

It is important to note that important stages such as obtaining the milk, maturing the cheese and cutting it must be carried out in this region.

In Galicia, there are around 38 cheese farms (queserías/quexerias) comprising 1,800 registered dairy farmers who produce the milk used to make cheese.

The cheese has high deformability and adhesiveness, medium creaminess and solubility, light elasticity and friability in the mouth, light granularity, medium moisture, and medium to high fattiness.

How to Consume Tetilla Cheese

Tetilla cheese should be tasted at room temperature, ideally between 16º and 18º C (not cold in the mouth), so that all the smells, aromas, and textures are released. It is therefore essential to take it out of the fridge some time before the expected time for consumption if the organoleptic characteristics are to be properly appreciated.

Its flavor is distinctively mild and buttery, with aromas similar to those of vanilla and walnuts. It has always tended to be eaten without any preparation. At most the accompaniments vary, which, apart from bread, can be nuts, honey, apple jam or quince jelly, and grapes.

In Spain, this cheese is usually consumed either as a snack or as a dessert, at the end of a lunch or dinner meal.

Few cheeses have such culinary potential as Tetilla cheese. From appetizers to desserts, there are recipes in which its presence acquires a special relevance. For those who are aware of its possibilities, it is that great little secret capable of enhancing the essence of many dishes. It melts very well and allows a large number of preparations to be gratinated. It gives flavour to fillings (peppers, mushrooms, cannelloni, vegetables, tomatoes, …… ).

Tetilla cheese can be used to prepare savory appetizers, kebabs or montaditos, fritters, purées, cakes, pies, tarts, it goes well with the flavour of smoked foods and aromatic herbs.

Tetilla cheese goes well with Sherry, Manzanilla, and young white wines, and better than well with the white wines produced in Galicia such as Albariño from Rías Baixas or Ribeiro, a white wine with aromas of fresh fruit, smooth and with very good acidity. A combination in which the wine respects the delicacy of the cheese and its acidity produces a pleasant contrast with the delicious creaminess of the cheese, a pairing suitable for everyone.

How to Store Tetilla Cheese

The best places for its preservation are cellars or cool and ventilated cellars, but since as almost no modern home has these facilities, the most suitable place is the refrigerator. In this case, in order to preserve Tetilla cheese properly, the temperature must be between 5º and 8º C, which is the lower part of the refrigerator. Pieces of different cheeses should never be kept in the same wrapper, as the aromas would be mixed, losing their individuality.

How to Cut Tetilla Cheese

The cut must be made with a wide, smooth-edged onion knife (one of those used for cutting meat). Ideally, heat the blade with steam, make a cut, heat the blade again, cut, and so on.

Start by cutting the cheese in half. Then cut each half into wedges, a little less than a finger thick. Each half produces at least 12 wedges.

Remove the rind from these wedges (very close to the rind) and cut each wedge into triangles. Each wedge yields about 6 triangles.

The presentation shall be in a tray, and in a non-piled form.

How to Produce Tetilla Cheese

Tetilla cheese is made from the milk of cows grazing in the coastal mountain range. The cheese masters used to mould the cheeses by hand.

The cattle must be fed in the traditional way, and one of the objectives of the Regulatory Council of Tetilla Cheese is to promote direct grazing.

The milk must be free from colostrum, preservatives, and drugs. Coagulation is carried out at 30-34º C (86-93º F) using an animal rennet extract, or other expressly authorized coagulating enzymes and lactic starters.

The right amount of rennet must be used so that coagulation takes no less than 30 minutes and no more than 60. The resulting curds are then cut to chickpea size, then some of the released whey is removed and optionally washed in freshwater to bring down the acidity to 4-6º Dornic.

Finally, the curds are molded to the right size and shape and pressed for the required time. The cheeses can be salted in a bucket and/or submerged in brine (24 hours maximum).

The DOP cheeses must be ripened for a minimum of eight days from the day after processing, during which period they are turned and cleaned so that they acquire the necessary characteristics.

It is not permitted to use any type of casein product, powdered milk, any type of fats including butter, illegal additives, or legal additives that have not been expressly authorized by the Regulatory Council.

The cheeses may not be manipulated in any way to alter the rind, which must retain its natural appearance and color. The DOP cheeses are identified with a label and numbered back-label issued by the Regulatory Council. The labels of the different producers must clearly state the name of the DOP.